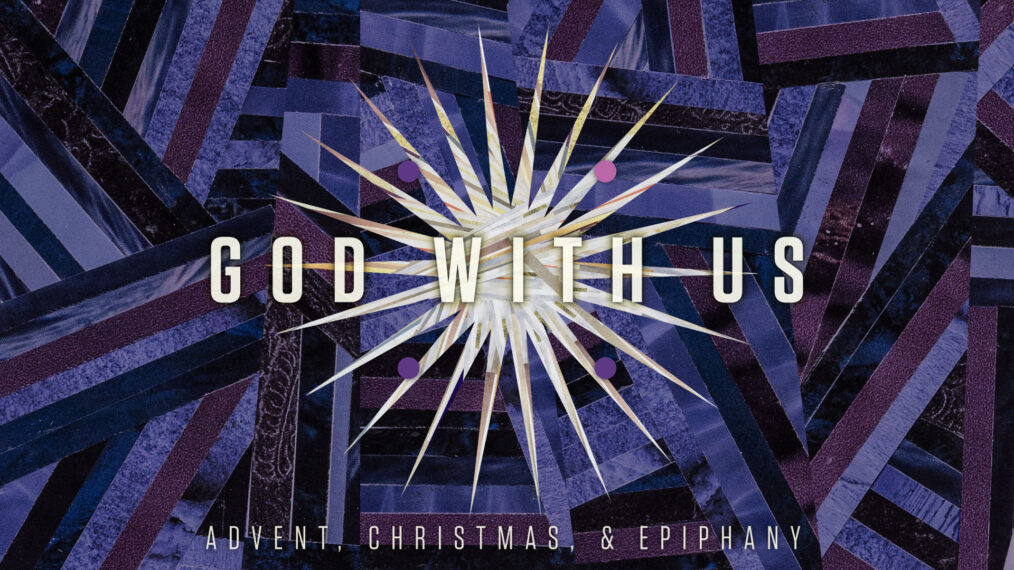 You may have noticed the Advent artwork for “God With Us” as well as the two banners hanging from the side of the stage (see below) and wondered what the story was with them. We asked Jeremy Grant, the artist who created them, to share a bit about some of the thoughts behind his artwork and this is what he said:

Purple and dark blue colors symbolize waiting and longing, and are the traditional colors of Advent. These darker areas (collaged from images of evening, twilight, deserts and water) show the brokenness and chaos of our world as they cut back and forth sharply.

Lighter colors (collaged from images of clouds and morning light) symbolize Jesus, the “light of the world,” cutting through darkness and chaos to bring light and peace. Little stabs of pink color represent joy.

There are two banners, representing Jesus’ comings to earth. Jesus, the messiah, has already come down to earth (as a child in Bethlehem) fulfilling the longing of the prophets and people of God from centuries past. And Jesus, the master of the cosmos, has promised he will return to earth again. So we look back, and remember what he has done. And we look forward with eager anticipation to what he will do next.

About the Artist
Jeremy Grant is an emerging artist and award-winning graphic designer. His collages and found-object assemblages have been exhibited in solo and juried shows across Colorado and Arkansas. Jeremy is married to an author, has two beautiful babies and loves Jesus, bourbon and robots. You can check out more of his work at jeremygrantcreative.com.

We hope the art stands a visual reminder of this season and helps shape your heart’s affection toward Christ and longing for His return! Engaging with Advent This Year

It doesn’t take but a quick glance at our news over the last week or two to know that something is not right with our world. The Paris bombing, the Syrian refugee crisis, the Colorado Springs shooting on Friday that killed 3 and wounded 9 others all stand as reminders that our world is a dark and broken place that needs saving.

Today marks the beginning of Advent, the Christian Calendar season that starts 4 Sundays before Christmas that both looks back to Christ’s first humble advent in a manger in Bethlehem, but primarily focuses in on His second glorious advent as judge in the clouds. This season is about longing, hoping, and anticipating Christ’s return to right every wrong in the world and wipe away every tear. It’s about acknowledging the shadows we face in this world but also praying for the dawn to drown out the darkness. It’s about the prayer of longing we find in Revelation 22:17:

We created an Advent guide to help lead you and your family through this season with various readings and prayers that you can pick up today at any service! If you’re not familiar with the Christian Calendar, or Advent, we’ve provided 3 links below:

May this season prepare our hearts for Christmas, and also increase our anticipation for and adoration of our King who will soon return. Come, Lord Jesus!

Why The Apostles’ Creed During Advent?

Throughout the season of Advent, we’ll begin our gathered time of worship reading the The Apostles’ Creed together. “Creed” means belief, and this particular one is the oldest of Christian creeds. Why will be focus in on this creed during Advent?

First, it helps frame the season of Advent.
This creed clearly articulates Christ’s incarnation (His first advent), death and resurrection, but also reminds us of his return to judge the living and the dead (His second advent). These are imperative to fully grasp this season; Christ came as a servant to lay down His life and will come again in power!

Second, it proclaims the gospel.
When JI Packer was asked if you can find the gospel in the Apostles’ Creed, he responded that the Creed was in essence a “power-point declaration of the basics of the Christian message – in other words, of the gospel itself.” While many have boiled down the gospel to certain basics for ease of comprehension and sharing, the Apostles’ Creed provides a full picture of the gospel without watering down any elements. It’s a way of reminding ourselves of the gospel’s larger story and beauty!

Third, it’s a tool for discipleship.
Over the last few years, so many books have been written on discipleship that it’s somewhat overwhelming to know where to start! The church in the second and third centuries would utilize the Apostles’ Creed as they taught new converts about the faith. These courses often lasted three years, culminating with their confession of faith, baptism, and communion on Easter. In the Apostles’ Creed, we learn the basics of Christian doctrine: the Trinity, creation, the Incarnation, the Holy Spirit, the Church, the forgiveness of sins, and the nature of our resurrection. When was the last time you read all of these held together in a single, fairly concise statement?

Fourth, it connects us to those who’ve gone before us.
The Apostles’ creed was written in the second century. In using it, we’re reminded that the Church wasn’t birthed in the last 20 years, but rather has been around for 2000 years and continues to hold to central and key beliefs grounded in Scripture. It’s a beautiful thing to know we are not alone in our journey!

I believe in God the Father Almighty,
Maker of heaven and earth,
And in Jesus Christ, His only begotten Son, our Lord:

Who was conceived by the Holy Ghost,
born of the Virgin Mary,
Suffered under Pontius Pilate;
was crucified, dead and buried;

He descended into hell.

The third day he rose again from the dead;

He ascended into heaven,
and sits at the right hand of God the Father Almighty;
From thence he shall come to judge the quick and the dead.

I believe in the Holy Ghost;
I believe in the holy catholic church;
the communion of saints;
The forgiveness of sins;
The resurrection of the body;
And the life everlasting.