Scott Erickson's Stations of the Cross

Art is a unique tool God has given us for meditation, often calling us to see something familiar in a different way or to see something entirely new for the first time. Over Holy Week, we're excited to be displaying Scott Erickson's "Stations of the Cross" series on the exterior of our building. Our hope with this installation is for those inside and outside our church community to engage with the story and severity of the events of Jesus' death in a new way.

As you view the installation, give yourself enough time to pause at each of the twelve pieces. You can learn more about the series at Scott's website, but here is a short explanation from the artist:

"The Stations of the Cross began as a remembrance that pilgrims had when they were retracing Jesus’ finals steps in Jerusalem up to the hill where He was crucified. Wanting to share that practice and experience with people who couldn’t make the trip to Jerusalem, they created local stations of meditation that became in itself a tradition. You can find this tradition on the inside of many churches still today.

"These stations are a cross-section of elements, ideas, and objects from Jesus’ journey to the cross. As you work through these stations, may you see the that we are not troubled guests in this world…that we are not forsaken…and that the good news of this season was expressed best by Jesus when He said… 'I have told you these things so that in me you may have peace. In this world you will have trouble. But take heart! I have overcome the world.'"

This journey to the cross is not only a meditation of Jesus accomplishing what He came to do – the redemption of humanity through His own willful sacrifice – but it’s also a contemplation of Jesus silently participating in some of the worst aspects of being human. We see Him being tempted to give up. Being betrayed by a friend. Being convicted in an unjust political system. Physical pain. Mockery. Public humiliation. Broken family relationships. And one of our greatest fears… having to die. These are all aspects of human life that He was not insulated from. In fact, on the cross He quotes King David saying “My God My God, Why have you forsaken me?”…as if to say ”Why is it like this?” He was one who was not separate from our own suffering.

Many of us feel the weight of anxiety and fear as we journey through the current world. We are told many narratives of how it is and what is to come. During this season of Lent, we as a community look to the life and teachings of Jesus. We think that One who was in the midst of such political and empirical turmoil, who spoke the words of “Be not afraid”… and “Come to me all you are weary and carrying a heavy load, for I will give you rest”… is someone who can illuminate our desperate viewpoint. 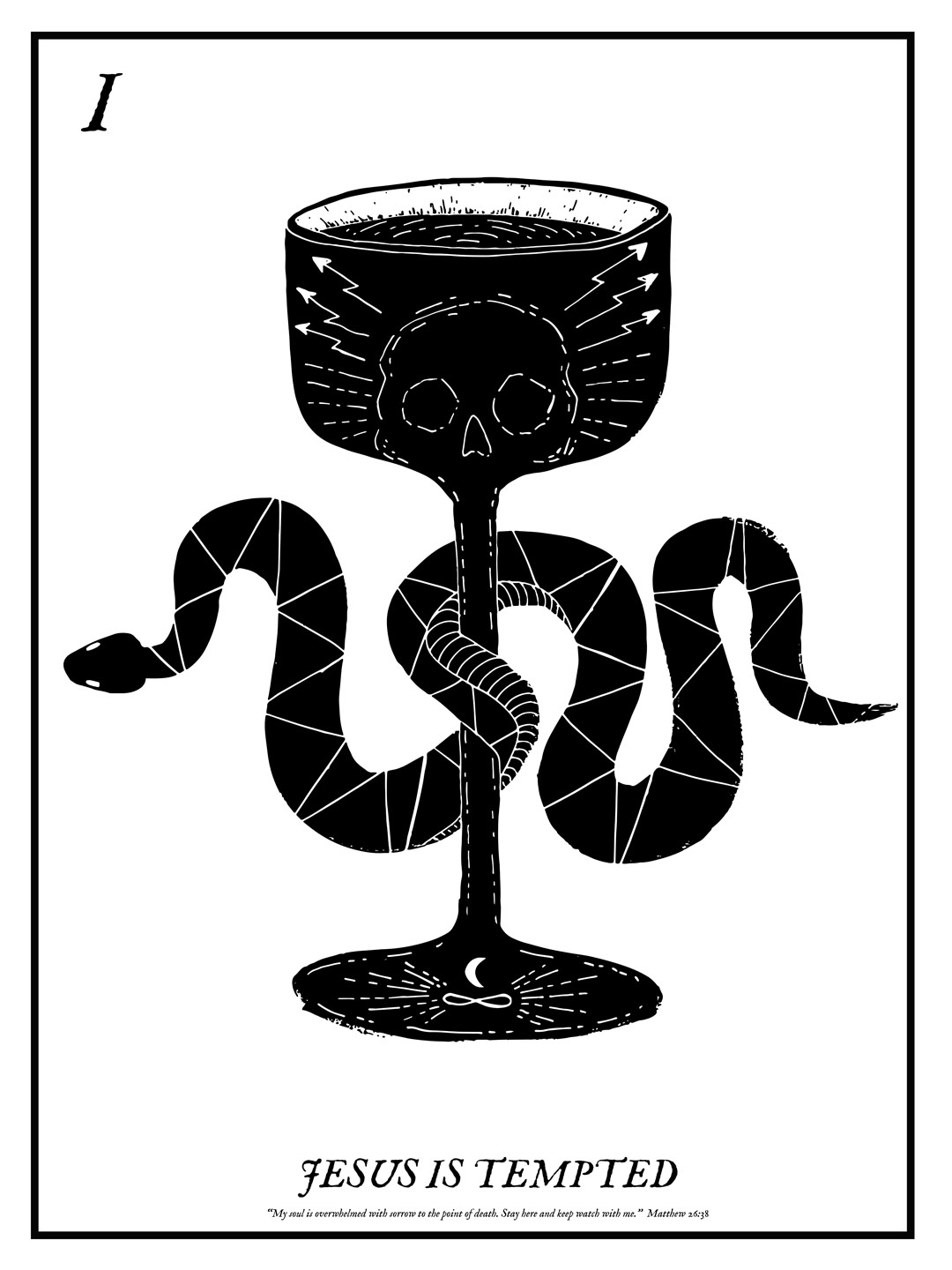 Matthew 26:38: My soul is overwhelmed with sorrow to the point of death. Stay here and keep watch with me.

Matthew 26:36-46: Then Jesus went with his disciples to a place called Gethsemane, and he said to them, “Sit here while I go over there and pray.” He took Peter and the two sons of Zebedee along with him, and he began to be sorrowful and troubled. Then he said to them, “My soul is overwhelmed with sorrow to the point of death. Stay here and keep watch with me.” Going a little farther, he fell with his face to the ground and prayed, “My Father, if it is possible, may this cup be taken from me. Yet not as I will, but as you will.” Then he returned to his disciples and found them sleeping. “Couldn’t you men keep watch with me for one hour?” he asked Peter. “Watch and pray so that you will not fall into temptation. The spirit is willing, but the flesh is weak.” He went away a second time and prayed, “My Father, if it is not possible for this cup to be taken away unless I drink it, may your will be done.” When he came back, he again found them sleeping, because their eyes were heavy. So he left them and went away once more and prayed the third time, saying the same thing. Then he returned to the disciples and said to them, “Are you still sleeping and resting? Look, the hour has come, and the Son of Man is delivered into the hands of sinners. Rise! Let us go! Here comes my betrayer!” 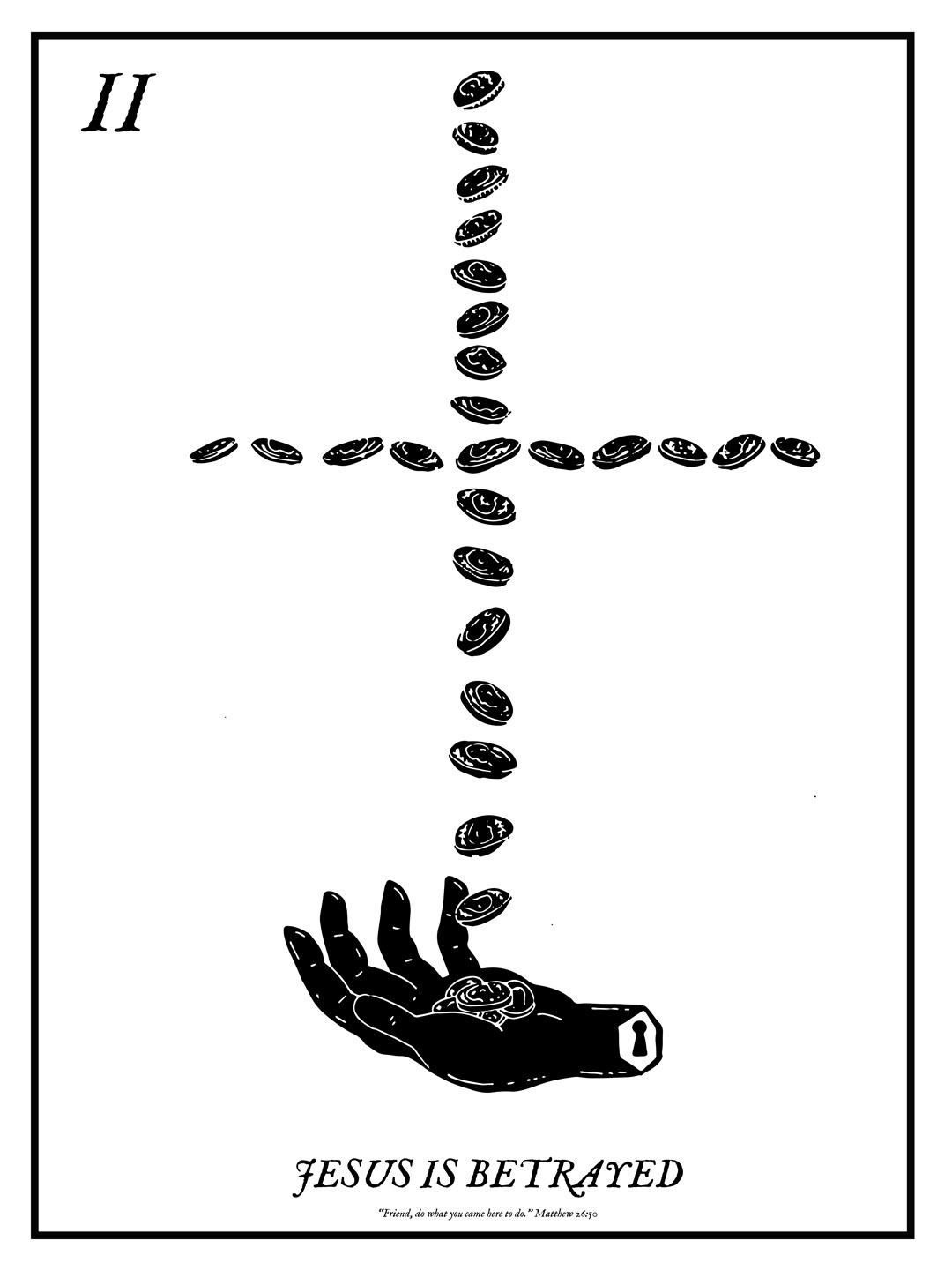 Mark 9:31: The son of man is going to be betrayed into the hands of men. They will kill him and after three days, he will rise.

Matthew 26:14-16: Then one of the Twelve—the one called Judas Iscariot—went to the chief priests and asked, “What are you willing to give me if I deliver him over to you?” So they counted out for him thirty pieces of silver. From then on Judas watched for an opportunity to hand him over. 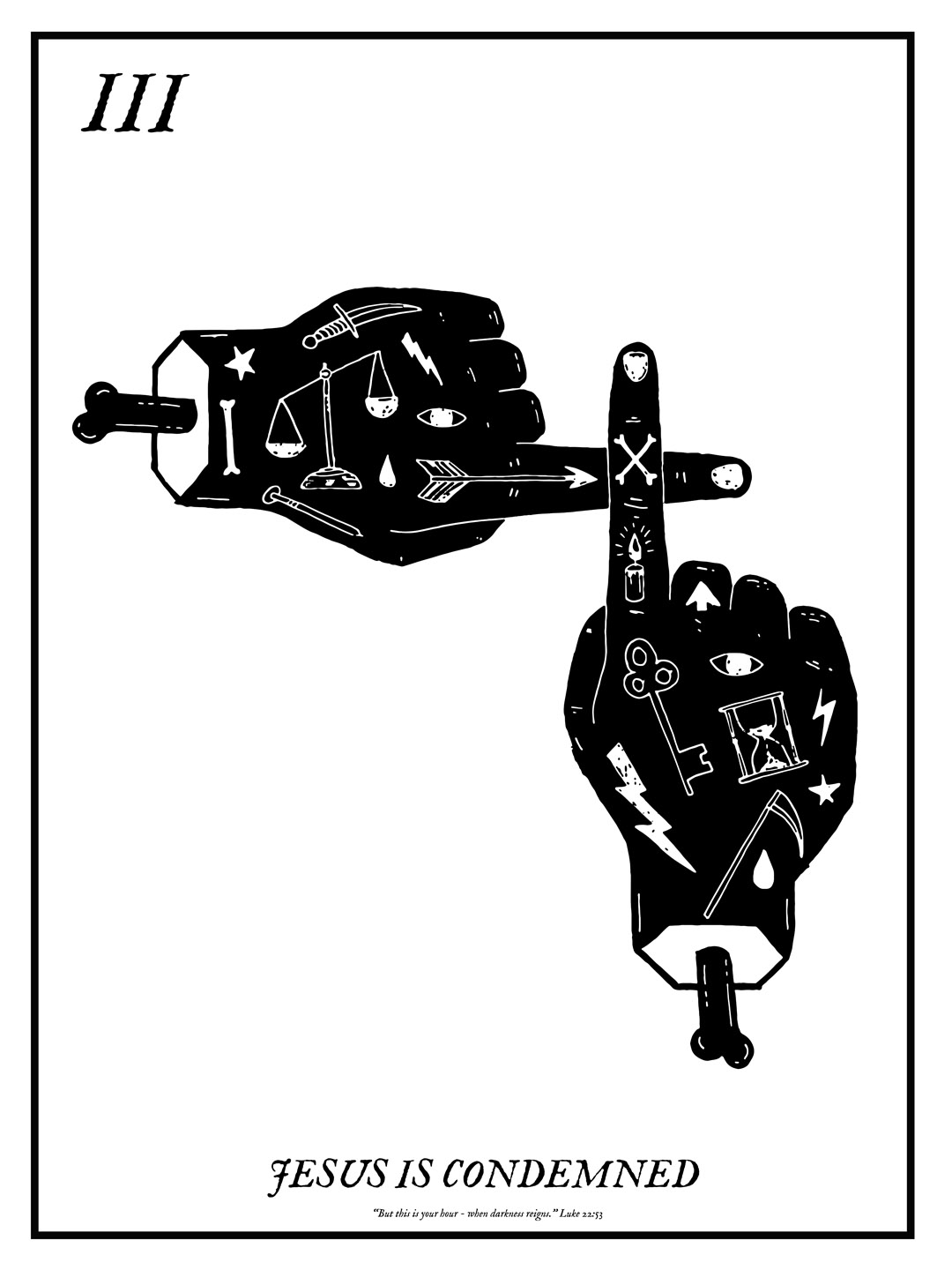 John 19:15: “Shall I crucify your king?” pilate asked. “We have no king but caesar,” the chief priests answered.

John 19:11: You would have no power over me if it were not given to you from above. Therefore the one who handed me over to you is guilty of a greater sin.

Luke 22:66-71: At daybreak the council of the elders of the people, both the chief priests and the teachers of the law, met together, and Jesus was led before them. “If you are the Messiah,” they said, “tell us.” Jesus answered, “If I tell you, you will not believe me, and if I asked you, you would not answer. But from now on, the Son of Man will be seated at the right hand of the mighty God.” They all asked, “Are you then the Son of God?” He replied, “You say that I am.” Then they said, “Why do we need any more testimony? We have heard it from his own lips.”

Jesus submits quietly and peacefully. Jesus is condemned by religious leaders. What was their fear? 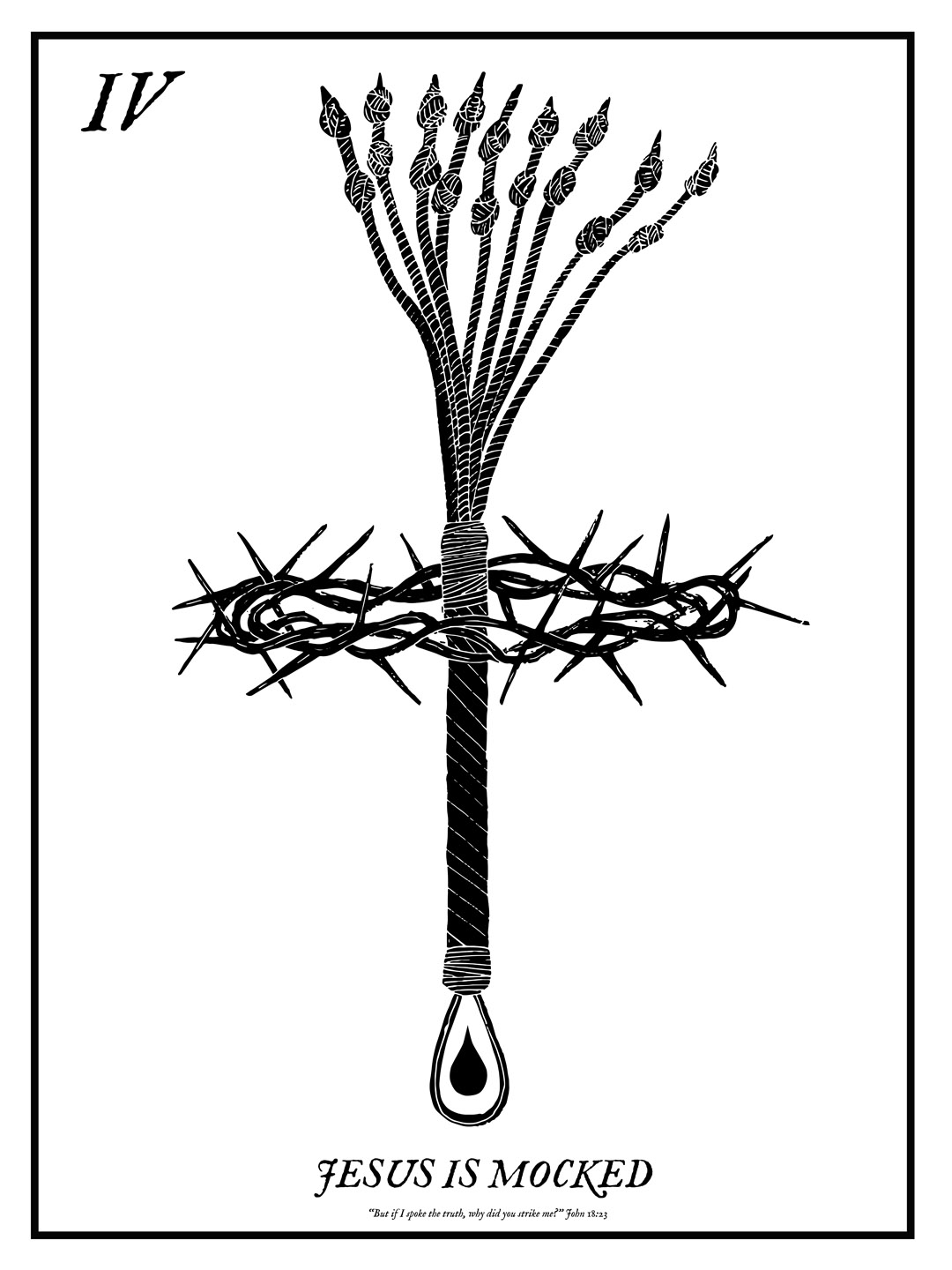 Matthew 27:28: They stripped him and put a scarlet robe on him.

Matthew 20:18-19: We are going up to Jerusalem, and the Son of Man will be delivered over to the chief priests and the teachers of the law. They will condemn him to death and will hand him over to the Gentiles to be mocked and flogged and crucified. On the third day he will be raised to life!

What brings on our mockery? These soldiers brutalize Jesus. Possibly their common response to jewish prisoners. Imagine the Son of God being brutalized by men.

5. Jesus is Given His Cross 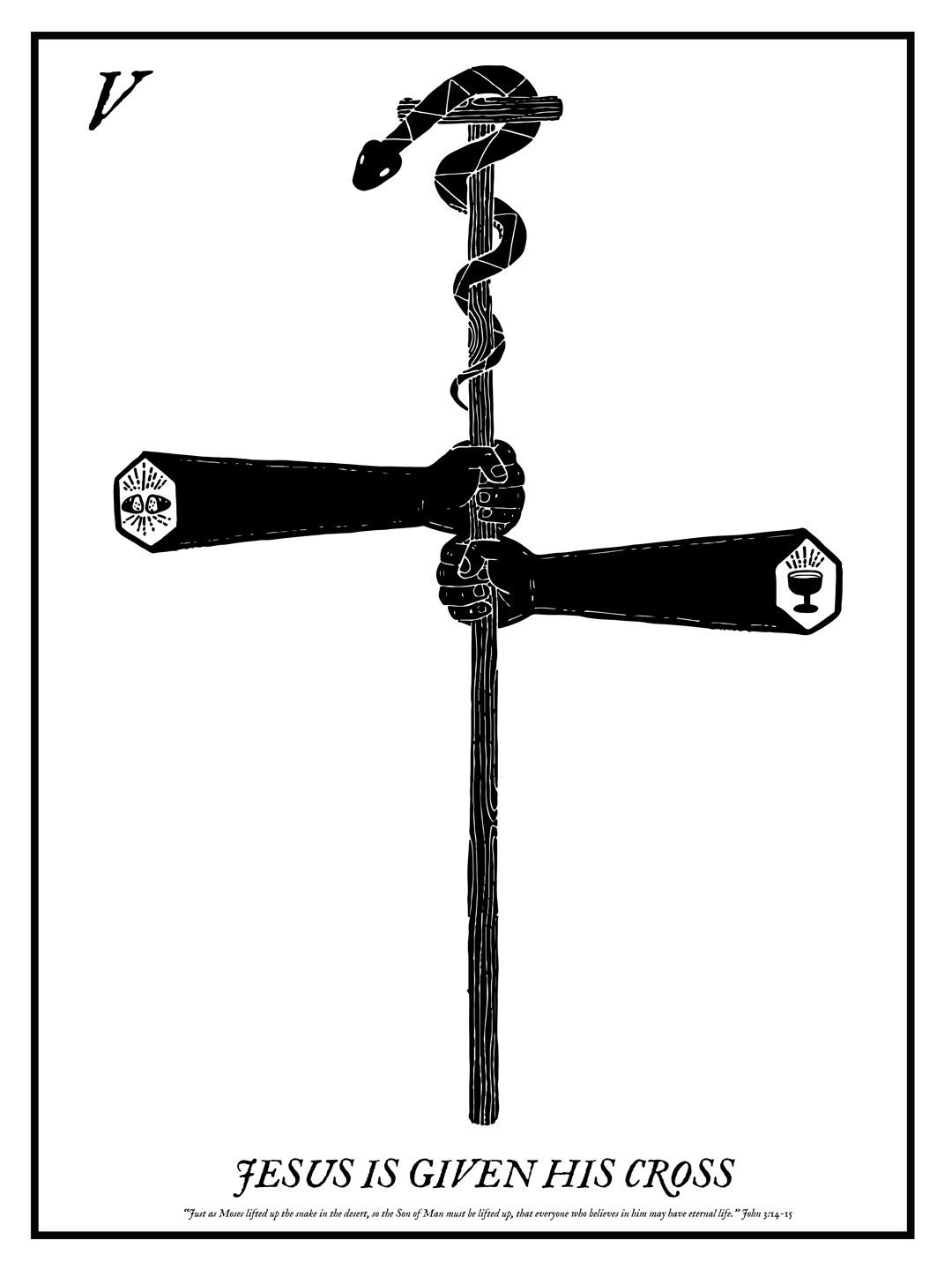 John 3:14-15: “Just as Moses lifted up the snake in the desert, so the Son of Man must be lifted up, that everyone who believes in him may have eternal life.”

The cross was a public murder device for criminals. This is how Jesus was killed. Imagine carrying the wood of the cross…up the hill to your eventual slow and public death. 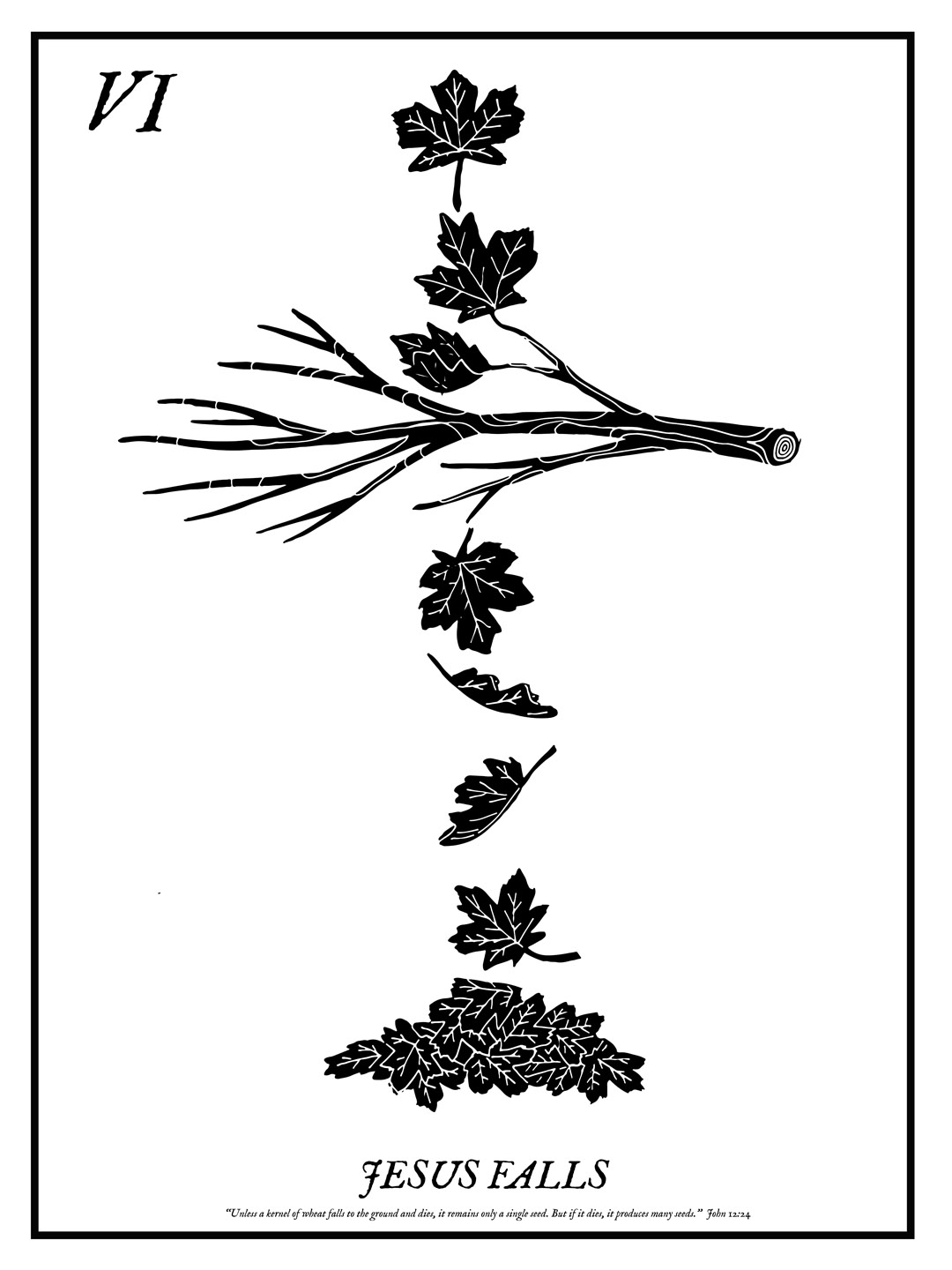 John 12:24: Unless a kernel of wheat falls to the ground and dies, it remains only a single seed. But if it dies, it produces many seeds.

This station, although not found in scripture, is traditionally in three stations. It symbolizes His humanity and his ever decreasing strength as He moves towards his public death. Imagine Jesus experiencing weakness and distress in a public setting with no where to hide. Imagine the exhaustion of the last 24 hours. 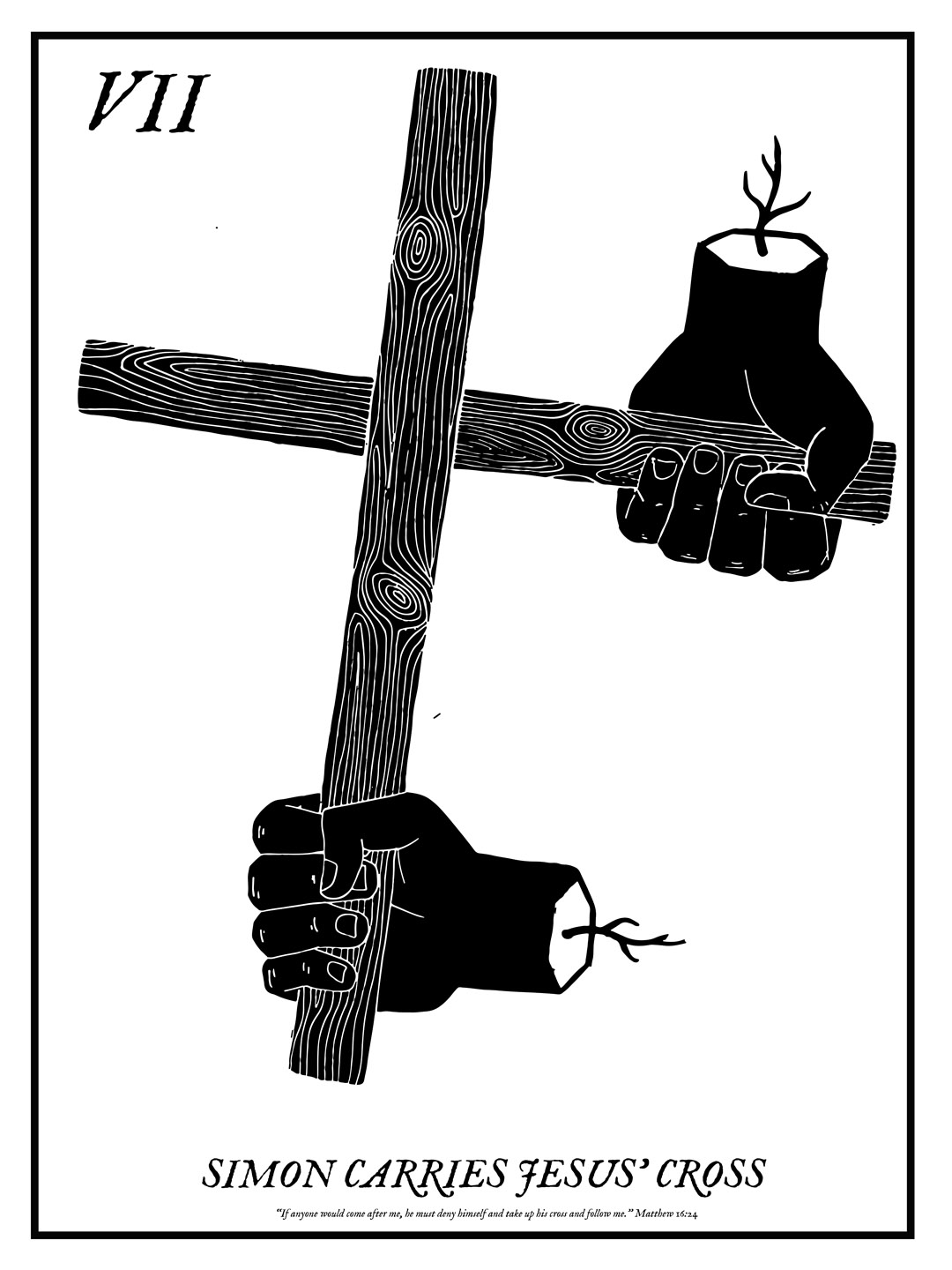 Luke 23:26: If anyone would come after me, he must deny himself and take up his cross and follow me.

Matthew 16:24: Then Jesus said to his disciples, “Whoever wants to be my disciple must deny themselves and take up their cross and follow me.”

Imagine being pulled from the crowd and carrying this man’s device of death. What is it like to walk alongside Jesus in this? 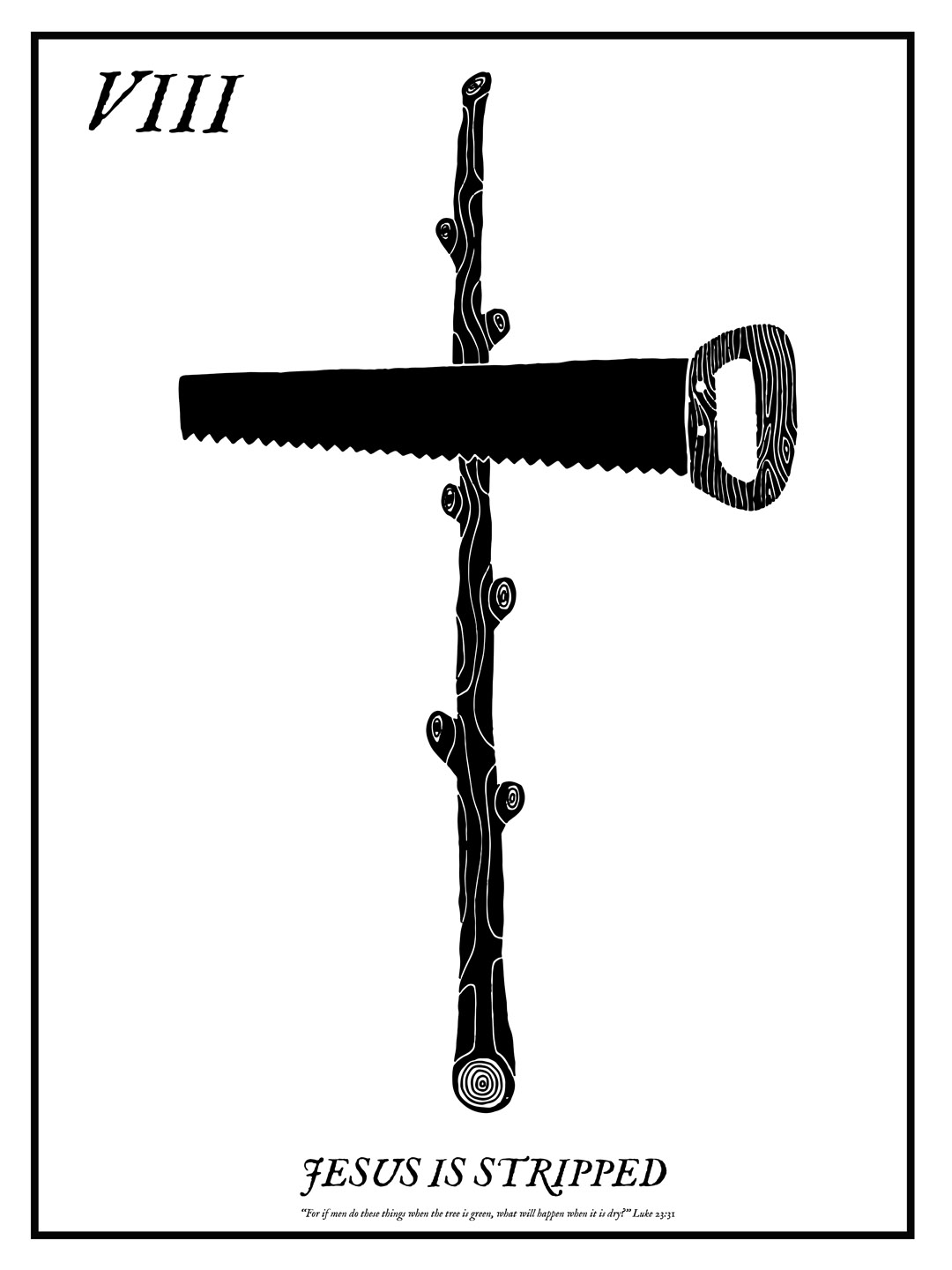 Luke 23:31 For if men do these things when the tree is green, what will happen when it is dry?

Luke 23:34: Father, forgive them, for they don’t know what they are doing.” And they divided up his clothes by casting lots.

9. Jesus is Nailed to the Cross 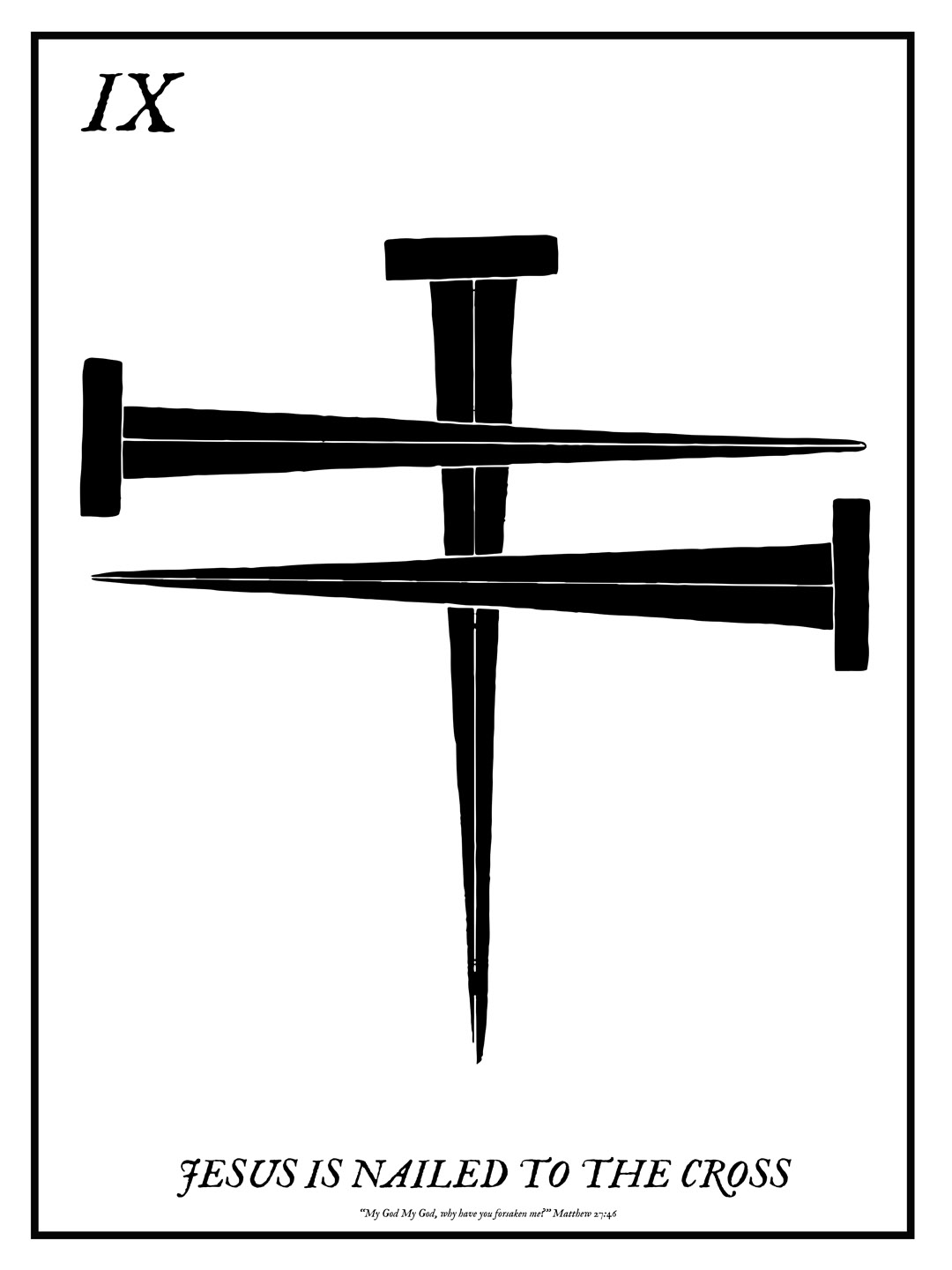 John 8:28: When you have lifted up the Son of Man then you will know that I am the one I claim to be….

John 12:32: And I, when I am lifted up from the earth, will draw all mankind to myself. 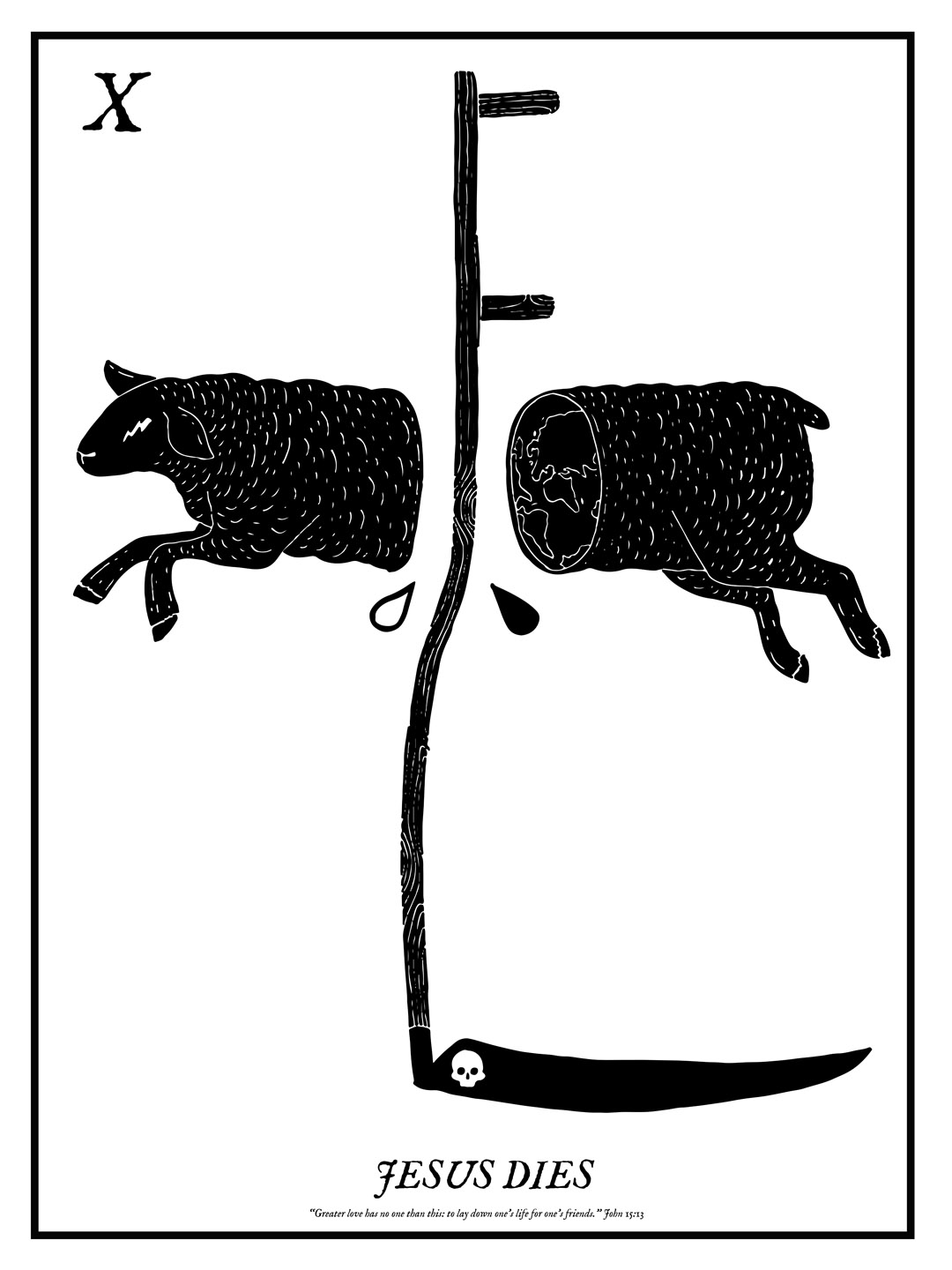 John 15:13: Greater love has no one than this: to lay down one’s life for one’s friends.

Jesus died. He died. Our greatest fear is death. And He was not insulated from that fear. His physical body stopped working. His friends watched Him die. 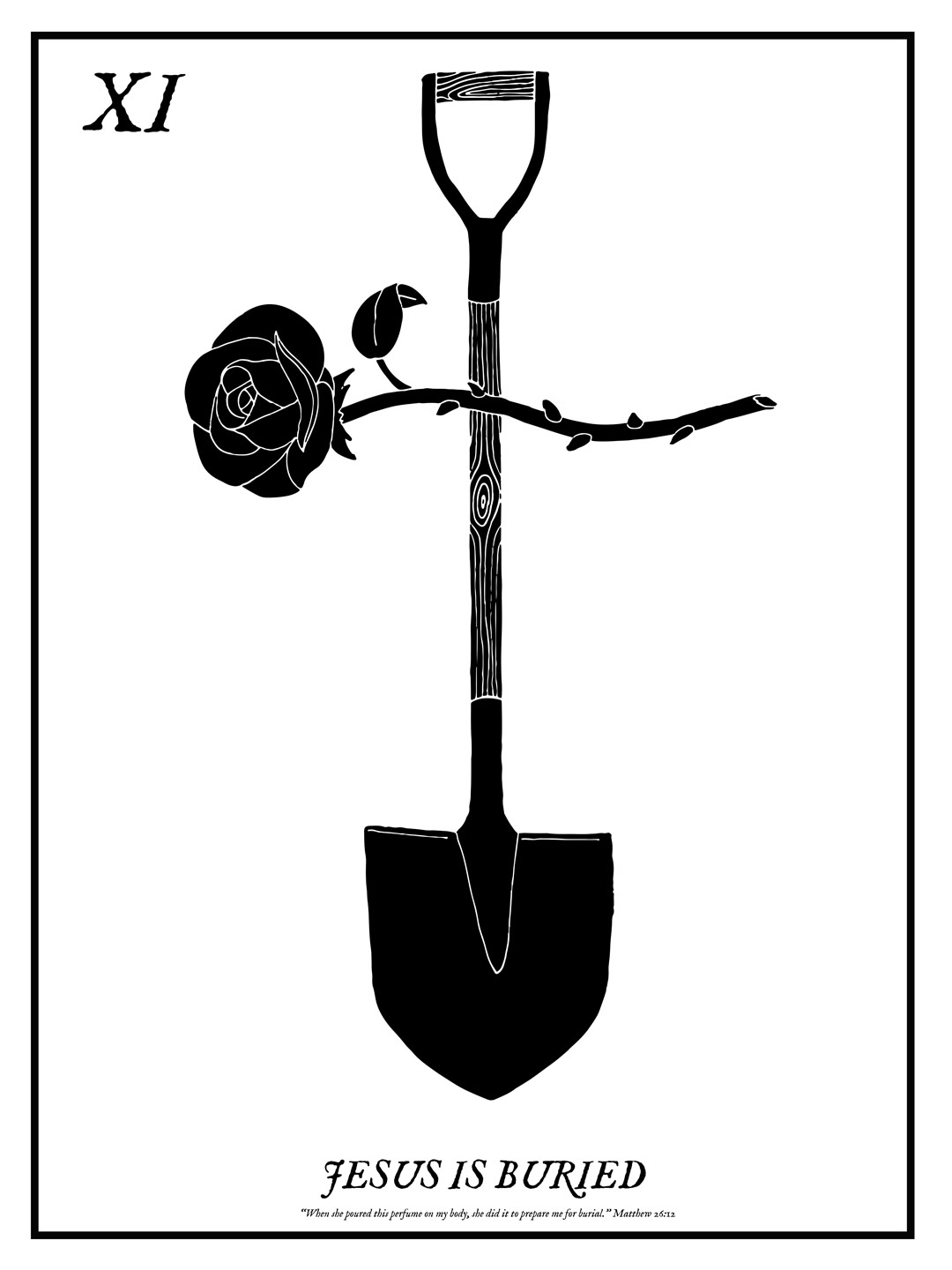 Matthew 26:12: When she poured this perfume on my body, she did it to prepare me for burial.

Luke 23:50-56: Now there was a man named Joseph, a member of the Council, a good and upright man, who had not consented to their decision and action. He came from the Judean town of Arimathea, and he himself was waiting for the kingdom of God. Going to Pilate, he asked for Jesus’ body. Then he took it down, wrapped it in linen cloth and placed it in a tomb cut in the rock, one in which no one had yet been laid. It was Preparation Day, and the Sabbath was about to begin. The women who had come with Jesus from Galilee followed Joseph and saw the tomb and how his body was laid in it. Then they went home and prepared spices and perfumes. But they rested on the Sabbath in obedience to the commandment.

His friends buried Him. Have you ever buried a loved one? Imagine doing that with the one you believed was going to change the world and bring ultimate justice and healing. 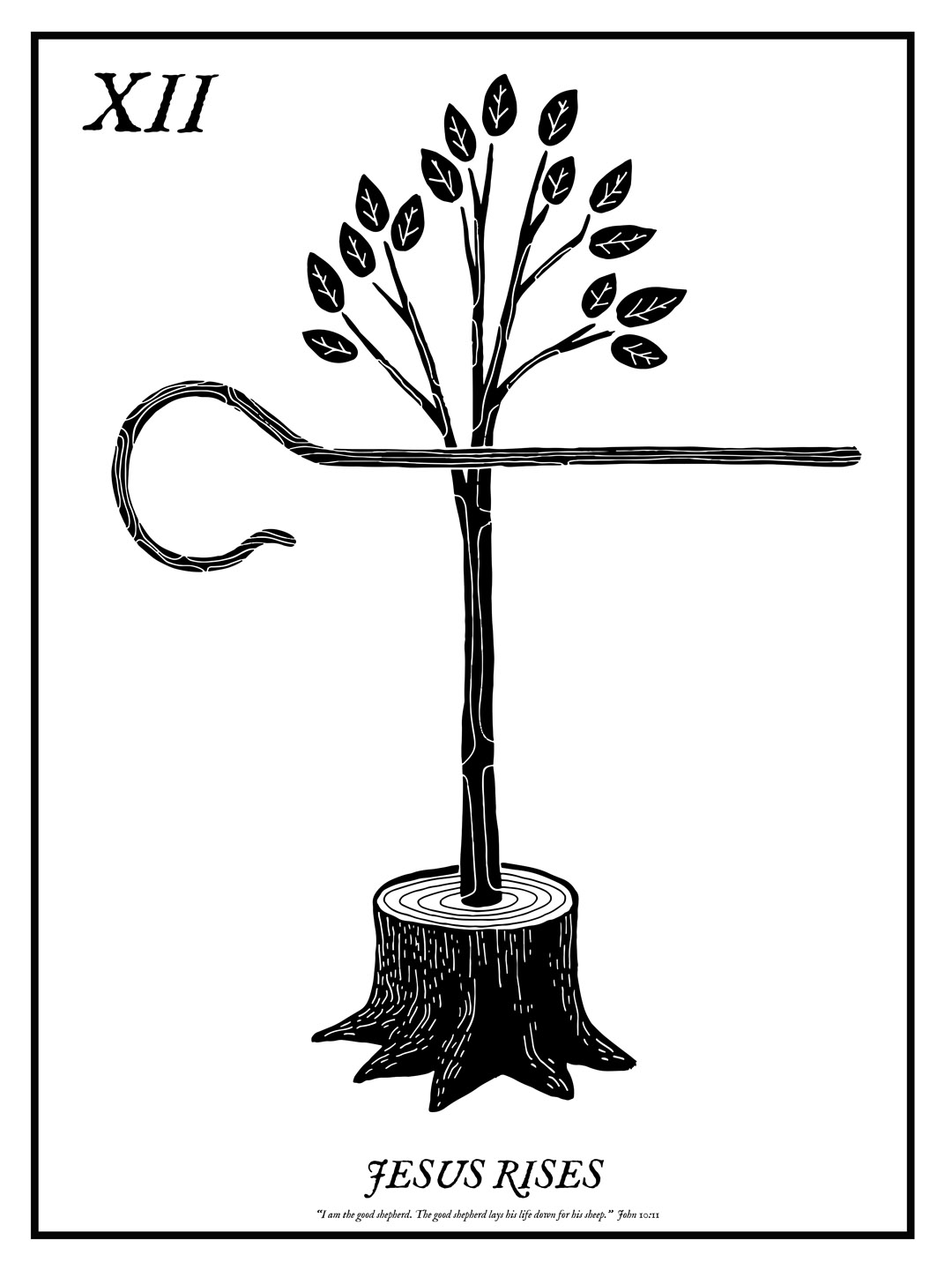 John 10:11: I am the good shepherd. The good shepherd lays his life down for his sheep. Don’t tell anyone what you have seen, until the son of man has been raised from the dead.

Matthew 17:9: As they were coming down the mountain, Jesus instructed them, “Don’t tell anyone what you have seen, until the Son of Man has been raised from the dead.”

Revelation 1:17-18: When I saw him, I fell at his feet as though dead. Then he placed his right hand on me and said: “Do not be afraid. I am the First and the Last. I am the Living One; I was dead, and now look, I am alive for ever and ever! And I hold the keys of death and Hades.

Matthew 11:28: Come to me, all you who are weary and burdened, and I will give you rest.

1 Peter 2:24-25: “He himself bore our sins” in his body on the cross, so that we might die to sins and live for righteousness; “by his wounds you have been healed.” For “you were like sheep going astray,” but now you have returned to the Shepherd and Overseer of your souls.

Consider the other side of our greatest fear. Jesus shows us that there is something beyond death.